We were thrilled to partner with the AFR Boss team to support a number of feature articles around corporate philanthropy in 2019, including a list highlighting the top 50 corporate givers.

Read the full article below or at AFR here 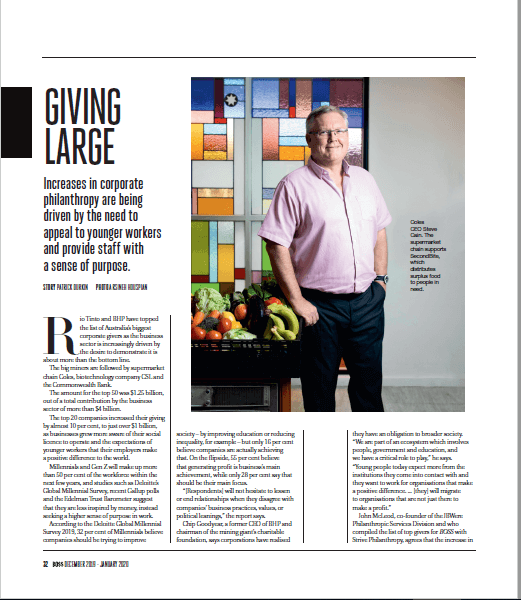 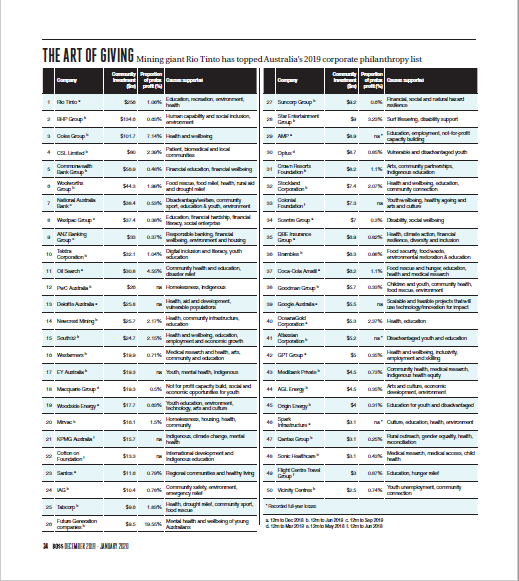 The business sector has increased its philanthropic efforts, driven by the need to appeal to younger workers and provide staff with a sense of purpose.

Rio Tinto and BHP have topped the list of Australia’s biggest corporate givers as the business sector is increasingly driven by the desire to demonstrate it is about more than the bottom line.

The big miners are followed by supermarket chain Coles, biotechnology company CSL and the Commonwealth Bank.

The amount for the top 50 was $1.25 billion, out of a total contribution by the business sector of more than $4 billion.

The top 20 companies increased their giving by almost 10 per cent, to just over $1 billion, as businesses grew more aware of their social licence to operate and the expectations of younger workers that their employers make a positive difference to the world.

Millennials and Gen Z will make up more than 50 per cent of the workforce within the next few years, and studies such as Deloitte’s Global Millennial Survey, recent Gallup polls and the Edelman Trust Barometer suggest that they are less inspired by money, instead seeking a higher sense of purpose in work.

According to the Deloitte Global Millennial Survey 2019, 32 per cent of Millennials believe companies should be trying to make society better – by improving education or reducing inequality, for example – but only 16 per cent believe companies are actually achieving that. On the flipside, 55 per cent believe that generating profit is business’s main achievement, while only 28 per cent say that should be their main focus.

“[Respondents] do not think highly of leaders’ impact on society, their commitment to improving the world, or their trustworthiness,” the report says. “They will not hesitate to lessen or end relationships when they disagree with companies’ business practices, values, or political leanings.”

Chip Goodyear, a former CEO of BHP and chairman of the mining giant’s charitable foundation, says corporations have realised they have an obligation to broader society.

“We are part of an ecosystem which involves people, government and education, and we have a critical role to play,” he says. “Young people today expect more from the institutions they come into contact with and they want to work for organisations that make a positive difference … [they] will migrate to organisations that are not just there to make a profit.”

John McLeod, co-founder of the JBWere Philanthropic Services Division and who compiled the list of top givers for AFR BOSS magazine with Strive Philanthropy, agrees that the increase in corporate giving is being driven by the need to appeal to younger workers and provide staff with a sense of purpose.

Simon Mordant has seen a change in the approach to corporate giving following the GFC. Peter Braig

“The days of the chairperson’s spouse’s favourite charity as recipient are long gone,” McLeod says.

With Millennials making up 53 per cent of its workforce, CSL freely admits the drive to appeal to its younger workers is key. “In a recent survey, employees agreed environmental and social sustainability enhances their motivation to work, is a factor in recommending CSL, and is a motivator to stay with the organisation,” the company says.

Corporate adviser and philanthropist Simon Mordant says the approach to corporate giving changed after the GFC. Public companies used to do more sponsorship of sports and the arts, but the beneficiaries found the cost of servicing them often exceeded the benefits.

“When businesses went through a tough part of the cycle, early things which got cut were sponsorships,” he says. “There has been an increasing focus on corporate foundations like BHP, Westpac, Coca-Cola, Origin, most of the big corporates. That trend has really been driven by an increasing focus on having a social licence to operate.”

The list includes cash as well as in-kind support and volunteering. Pure “no-strings-attached” philanthropy or cash donations make up just 10 per cent of the support.

“We hope the results of this analysis encourage increased contributions and transparency, and stimulate an environment of healthy competition for corporate community investment,” Strive Philanthropy co-founder Jarrod Miles says.

Rio Tinto, at the top of this year’s list with $256 million, says it focuses on partnerships that can deliver shared value for communities, employees and shareholders. “Our partnership with the Royal Flying Doctor Service in Western Australia is a good example,” Rio CEO Jean-Sebastien Jacques says.

Other examples include a long-term partnership with Clontarf Academy, which helps in the education and employment of young Aboriginal and Torres Strait Islander men, and a focus on the future of work.

“We have partnered with the South Metropolitan TAFE and the WA state government since 2017 to develop Australia’s first nationally recognised qualifications in automation,” Jacques says.

Goodyear says the BHP Foundation was put in place in 2015 to focus on long-term strategic philanthropy that goes beyond the miner’s direct business.

“When we began, we obviously felt an obligation to support the communities in which we operate,” he says. “We felt that was not only the right thing to do, but was good for BHP. It directly supported the health of the community, the educational capability and the workforce.

“But as time has gone on, the expectation for companies has expanded, and rightfully so. Big business has not had the reputation it ought to have in terms of what it gives back to society. So we do have to think beyond the communities in which we operate.”

One of the big movers on this year’s list is Coles, which contributed more than $100 million in its first year since demerging from Wesfarmers. Coles says a further $14 million was contributed by customers, team members and suppliers, representing a 50 per cent increase on the previous year.

BHP and CSL also recorded big increases, each up by about $30 million. Contributions by property group Mirvac increased six fold to $16.1 million, in line with a new community investment strategy and target.

Woolworths, sixth on the list, increased its giving to more than $44 million, up from $31 million in 2018. However, the retailer’s dramas over underpaying staff raise questions about whether a company’s wider ethical behaviour undermines philanthropy efforts.

In November, following allegations that some of its customers had made payments linked to child exploitation in the Philippines, Westpac announced it would give $18 million over three years to the International Justice Mission and $6 million over six years to match the government’s funding for its SaferKidsPH partnership with Save the Children, UNICEF and The Asia Foundation.

“I think it fair and proper that corporations contribute funds in support of activities that build and maintain social and natural capital,” he says. “The choice of what to support is driven by a range of factors, which can include elements of self-interest. [But giving and responsible business practice] should be judged separately and on their own terms.”

While significant, the contributions of the big banks continue to look low as the reporting standards do not include “foregone revenue”. If this revenue were included, it would add significantly to the banks’ contributions: $281 million for CBA against the $56.9 million on the list; $129 million for Westpac compared with $37.4 million; and $142 million for ANZ as opposed to $33 million. Telstra’s contributions would also increase to $108 million, against its listed total of $32.1 million.

JBWere’s McLeod says companies have become much more targeted in their support, aligning it to their business, stakeholders and broader purpose in the community. For example, the majority of Medibank’s $4.5 million investment goes into mental and general health, and into medical research.

Coles pours significant resources into SecondBite, which rescues fresh food destined for waste and redistributes it to people in need, donating the equivalent of 85 million meals to people since 2011.

CSL directs most of its $80 million into tackling disease. Its causes include improving the diagnosis of bleeding disorders in developing countries through the World Federation of Hemophilia and helping the World Health Organisation’s pandemic influenza preparedness through vaccines, antiviral medicines and diagnostic products, and a partnership to save lives from snakebites in Papua New Guinea.

The research was conducted by Jarrod Miles, founder of Strive Philanthropy, and John McLeod, of JBWere Philanthropic Services.

Amounts are for community investment and include philanthropic donations, in-kind support plus pro bono and volunteering.

Amounts exclude leverage facilitated by companies (such as staff donations through workplace giving), revenue foregone (for example, the difference between market and subsidised loans or medicines provided), political donations, commercial sponsorships or purchases of community goods or services when business in nature.